The most amazing artists in the world have come together to celebrate thirty years of Stan Sakai’s marvelous samurai rabbit saga, Usagi Yojimbo. The participating artists bring their own interpretations and their own styles to the subject, making this book a one-of-a-kind treasure.

Produced in association with the Comic Art Professional Society (CAPS). All proceeds from this book will go to Stan and Sharon Sakai.”

160 pages; HC, 9”x 12”
$29.99
Yesterday I headed on down to my LCS (the Source Comics & Games) to pick up my copy of The SAKAI Project. I have to say Darkhorse out did themselves on this book. The large 9×12 Hard Cover format is the perfect size and very nicely bound.
I opened the book and went right to the Forward, I wanted to read it before I even looked at the art work inside. Granted I had seen quite a few of the images on the CAPS auctions over the last few weeks, but I felt it might enhance my experience and enjoyment of the book if I read it first.
I have to say it definitely did, the forward was written by Mark Evanier, who works on Sergio Aragone’s Groo the wanderer comic. I wont spoil the forward which is titled SHARED SUFFERING, but I will tell you that it is more than worth your time to read. Mark does a great job detailing the kindness of the Sakais and all of the comic creators that contributed to this book.
Next we have a Preface letter written by Tone Rodriguez, Vice President of the Comic Art Professional Society. This is the man responsible for this project, not just this book but also the ebay auctions of the original pieces. He did all of this just to help out Stan and Sharons medical bills (for those of you that dont know, Sharon was diagnosed with a brain tumor in 2004) and submissions flooded in from around the world.
This book has 157 pages of just art work, many of the pages have multiple images. It is by far the most beautiful tribute to a creator I think I have ever seen. I wanted to showcase a few of my favorite pieces but after only getting a quarter of the way through the book, I decided it would take me several hours to write up a list of creators and their submissions.
Rating: 5 out of 5
If you love Usagi Yojimbo you will love this book. If you dont know Usagi this is a great way to find out why so many people, fans and creators, love this character and mainly the man that created it. Stan Sakai
So please, contact your LCS, DCBS, book store, Darkhorse.com and order this book. You wont be disappointed and you will be helping a man and his family that have brought so many great adventures to the pages of comic for years.
Thank you Mr. Sakai

This week we discuss a lot of different Star Wars related topics, check out the links below for more details.

#1 for $1 Star Wars
Brian Wood (W), Carlos D’Anda (A), Gabe Eltaeb (C), and Alex Ross (Cover)
On sale Oct 2
FC, 32 pages
$1.00
One-shot
Relive the blockbuster first issue that launched Brian Wood’s Star Wars—for only $1! We take you back to those heady, adventure-filled days when the Empire ruled, the Rebels were on the run, and the galaxy was a dangerous place where anything might happen!
If you like this issue, pick up the trade paperback collection, currently on sale!
• First issue, value priced at $1.00!
• Look for more #1 for $1 issues in the coming months.

The Star Wars #2 (of 8)
Jonathan Rinzler (W), Mike Mayhew (A), Rain Beredo (C), Nick Runge (Cover), and Ralph McQuarrie (Variant cover)
On sale Oct 2
FC, 32 pages
$3.99
Miniseries
The Empire is poised for an attack on the peaceful world of Aquilae, and only Jedi General Luke Skywalker seems concerned. When King Kayos is killed, Jedi in training Annikin Starkiller is ordered to find Princess Leia, while Skywalker sends his only squadron against the Empire’s powerful new battle station!
• Official eight-issue adaptation of George Lucas’s original rough-draft screenplay for Star Wars!
what if george lucas had written another version of star wars?
he did!

“Hardman’s artwork is drool worthy. Mix in some stunning color work by Rachelle Rosenberg and you have everything one could possibly want in a Star Wars book.”–IGN

STAR WARS: LEGACY #8
Corinna Bechko (W), Gabriel Hardman (W), Brian Thies (A), Rachelle Rosenberg (C), Augustin Alessio (Cover)
On sale Oct 23
FC, 32 pages
$2.99
Ongoing
Ania Solo and Imperial Knight Jao’s search for Sith leads to the poisoned Mon Calamari homeworld of Dac—where their ship is boarded by pirates who have taken over the planet’s orbiting shipyards.
Jao senses the dark side at work—especially when he and Ania are marked for death!
• Sith, pirates, and the planet of the dead!
“Star Wars: Legacy is another excellent extension of this universe, as it does just enough right for both fanboys and fangirls to be worthy of the heritage it now represents. “ —Unleash the Fanboy

Star Wars Omnibus: Knights of the Old Republic Volume 2 TP
John Jackson Miller (W), Brian Ching (P), Bong Dazo (P), Scott Hepburn (P), Alan Robinson (P), Dustin Weaver (P), Dan Parsons (I), Joe Pimentel (I), Michael Atiyeh (C), and Colin Wilson (Cover)
On sale Dec 18
FC, 440 pages
$24.99
TP, 6” x 9”
After Zayne Carrick is framed for the murder of his fellow Jedi in training, his poor luck prevents him from clearing his name and throws him into dangerous situations all over the galaxy, leading to his final confrontation with the Jedi Masters who massacred their own Padawans!
• Expands the story of the smash-hit Knights of the Old Republic video games!
• From the New York Times best-selling novelist John Jackson Miller!

Episode 46 – A Throne Worth discussing

On this weeks episode we have a round table discussion about the HBO series Game of Thrones.Please be aware that this episode contains some strong language.

Episode 37 – The Dragonlance Chronicles – Book I: Dragons of Autumn Twilight

This week we continue our Dragonlance discussion with a look at the book that started it all – Dragons of Autumn Twilight! 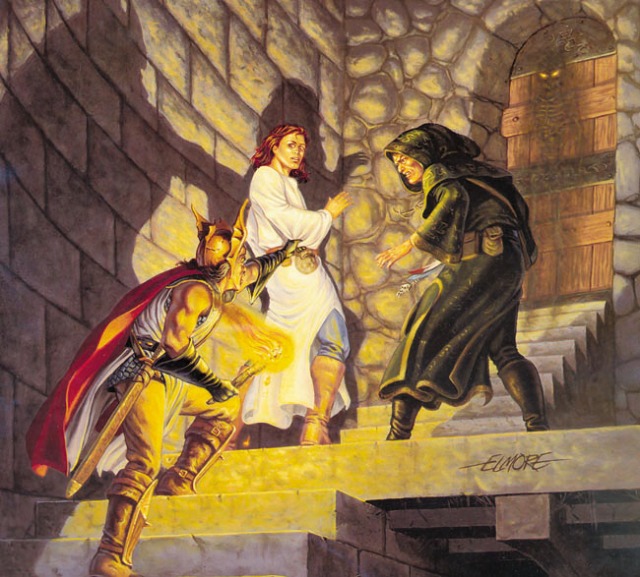 This week the Rambler and I discuss the world of Krynn, our favorite novels, characters and Authors. If you have never read a Dragonlance novel, here are a few links to information on the world and Authors.

Coming in three weeks! We are celebrating Supernatural with not 1 but 2 episodes dedicated to the series! Thats right, the first one will focus on the long running TV series, comics and more! While the second episode will be another RPG Corner featuring the Supernatural RPG (Cortex system)!

If you would like to comment on the series, comics or RPG (good or bad) comment below and we will read it on the show! Come on people join in the discussion!

On this episode of the Geeks Menagerie, The Rambler (Greg) and The Dancing Bear (Uriel) Join me (Greenloontern) to discuss / review the Dresden Files Novels and TV series. So listen now or download it for later but listen! Dont forget to subscribe to the podcast on ITUNES Thanks for listening everyone! Let us know what you think!

You can watch the Dresden Files for free online on HULU and Amazon Prime.

* The full history and making of the The Legend of Zelda™franchise, never-before-seen concept art!
* Introduction by Shigeru Miyamoto!”

The following Q&A is from The Dark horse comics blog:

TRANSLATING A LEGEND – AN INTERVIEW WITH ARIA TANNER

Your source for everything your inner geek needs!

The Geeks Menagerie
Powered by WordPress.com.