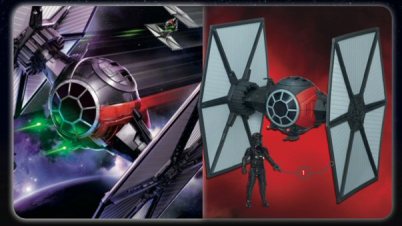 For our second review we take a look at the 3.75 First order Tie Fighter w/ Pilot. We had the x-wing already so you have to have an enemy vehicle to fight with. This ship retails for $39.99 which I think is a reasonable price for a toy this size and it looks pretty good. So lets break it down:

Time to tell you about our issues with the Tie Fighter, so far we have gone through 2 ships( returning the second one today).

1st Tie Fighter – Left wing would fall off the ship if you tapped the upper or lower edges of it and sometimes it would fall off as you are “flying” around. Now granted the release button for both wings are easy to accidentally hit do to there location on the bottom of the toy. This one clearly had a defect in the connection point. Also there is a movable antenna on top of the ship, on this one the plastic which the antenna snaps into was weak and broke.

2nd Tie Fighter –  On this one the wing connections appear to be working better than the first. Unfortunately the button that launches the missiles kept catching on something internally until the missiles wouldn’t fire at all.

Keeping fingers crossed that when I exchange this one today the new one will work properly. For those of you worried about the wings, I found that if you press the button to jettison the wings and reattach them a couple times they seem to hold to the ship a bit better.

I really want to love this Tie Fighter but it does have flaws, plus I dont like my toys to fall apart! But a new generation and new series of toys. I will admit I do like the idea of the “exploding Tie fighter”, I just wish they had designed the wing connections a bit better.

“I love this one! Shooting the missiles is the best!” Once again he makes me realize that kids have the best perspective on toys. If they are fun to play with, it doesnt matter how much you spent on it or if a piece of plastic broke. Thats called battle damage! Just remember its a toy and if you buy it for your kids they will love playing with it as much as you did when you where a kid.

Update 9/5/2015: So I picked up the 3rd Tie Fighter and this time everything is working properly! The wings fit snug and dont feel like they will fall off if you bump them. The missile launcher works as well. I wish this was the one I had picked up first, I would have given it a 5 out of 5!  I know some of you arent as pick as me but I figure if you are going to spend $40 you should get your moneys worth.